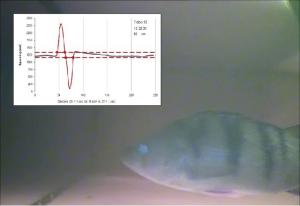 A resistivity FishCounter (Logie 2100C) is used to monitor continuous fish migration/ movements in flowing waters. The resistivity Fish Counter detects fish passage by measuring a change in the bulk resistance of the water as a fish swam across an array of electrodes that span the stream.

The Fish Counter saves the time of a passage, lenght of the signiture (size of the fish) and the counter can differentiate between upstream and downstream passage. When a fish passes the set up, the Fish Counter triggers an underwatercamera to record several seconds, so the fish species can be determined. The video camera records during the day and night. During the night artifical light is used.

The data of the fish counter is send via a wireless internetconnection to the office of VisAdvies were the data is analyzed.

Use of the Fish Counter
• A submerge tube frame is developed to monitor smaller fish passes with a flow of 400 liter per seconde. The tube can also set up with a guide fence. A larger flow can pass, but fish can only pass the tube.
• For larger fish passes or smaller rivers a crump weir is set up at the research area.

Video
For the County administration board of Region Gävleborg, VisAdvies installed a Fish Counter in river Björkeån at Hillevik (Sweden). The spawning migration was recorded with the underwatercamera.