Latest results (June)
Upstream migration (black bars) is over and most detections are from fish returning to the sea (red bars). However, the numbers are still low. When fish is moving downstream, predators are waiting for their chance of a fresh meal. From our video's it is clear  that pikes regularly block the Fish Counter tube, waiting for fresh fish from the lake. See: "Pike waiting for fresh fish" at FiskaGävleborg.

Read further below about the research.

River restoration
In Sweden many rivers were canalized in favour of the logging industry in the past centuries. This resulted in impassable barriers for inland fish migration from the Bothnian sea. Recently, much effort has been given on river restoration by means of returning boulders in the riverbed and building fish ways. 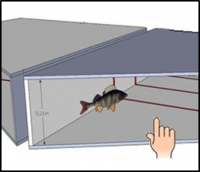 Monitoring fish migration
One of the major challenges is the assessment of the effect of all these measures. Most common in the monitoring  of fish migration is the use of fyke nets. However, there are quit some disadvantages to this technique.  A fyke is very selective for small fish resulting in the under estimation of the larger species/specimens. Especially in clear water, fish will notice the fyke and refuses to enter the trap. An better alternative is the Fish Counter. VisAdvies uses an improved version of the Aquantic Logie Fish Counter. An underwater camera is connected to identify the fish species.

Test site
The County administration board of Region Gävleborg requested VisAdvies to monitor the fish migration in the river Björkeån. Before the river was restored in 2012, fish migration was practically zero. After the restoration, 521 perch, 178 roach and six pikes were observed in a fyke trap in 2014. In spring 2015 VisAdvies started monitoring migration with the fish counter.

Results
The migration is very much dominated by roach, perch and pike. Only in the first weeks more than two thousand fish were spotted in upstream direction. On the migration peak, at April the 23th, about 400 fish had passed the fish ladder. Mainly larger specimens of roach, perch and pike passed the fish ladder in upstream direction. Roach and perch migrated mainly in shoals (see video below).